Mary showed to be one of the strongest and most devoted Christians of self documented history as she overcame all sorts of hurdles. She recognized the flaws of gender roles in society as she watched her protectors of Lancaster get slaughtered and bludgeoned in front of her. She then watched her child die and held it in her arms as she mourned her death. Now hunger began to set in to which she thought she may succumb to at any moment. She begged for scraps from her captors to which she only occasionally was fed. These people showed to be ruthless in their treatment of her. However it is not necessarily just one’ sides’ fault as both perpetuated an intense antagonistic relationship. This behavior and resentment was bred into both sides from an early age. But this relationship only worsened.

Mary used her skills in knitting to get more food from the Native Americans thus guaranteeing her survival for extra time, which is ironic since her gender role was to cook, clean, and knit not collect food and trade goods. It was also common practice in this time for women to assume control over the man’s roles should he be found to be incompetent.
Hansard, Chelsea. “Criticisms of Patriarchy in Mary Rowlandson’s The Sovereignty and Goodness of God (1682).” The Eagle Feather 10 (2013): Web. 20 February 2017.
Rowlandson, Mary. Narrative of the Captivity and Restoration of Mrs. Rowlandson. Nisyros Publishers. September 14, 2014. Accessed February 2017.

Mary was of a puritan background. Most people don’t realize how severe the puritan behavior was as far as being radical goes. These people really did show to have something close to cult-like behavior.

Just like the Salem witch trials had roots to the devotion of God in puritan faith, the puritans owe every single event whether it be for better or worse to their God.

Mary Rowlandson frequently thanks God for all of the things that happen and begs for forgiveness everytime something negative happens to her. She calls herself a sinner frequently without providing any real reasons as to why. Any today’s standards this would definitely be considered cult-like behavior. If someone were to come and tell you that they wrecked their car and felt as though it was God punishing them for a sin then you would likely prefer to steer clear. This is exactly what Mary Rowlandson did, but it may be the exact reason she survives Regis experience. Her devotion to God was really the motivating factors to her, as she would read her bible and find additional motivations to push forward. She believes that although she was put into a rough situation that God would ultimately lend her a powerful hand out of her horrific situation of captivity. Her captivity was actually something more similar to slavery as she was traded amongst the Native Americans for goods. She had different owners among her removes that she was forced to answer to, as did her son. However one could argue that she was instead an indentured servant since she was able to trade goods among the Native Americans for her sewing and clothing skills.
Rowlandson, Mary. “The Narrative of the Captivity and Restoration of Mrs. Mary Rowlandson.” EBSCO Publishing Service Selection Page. EBSCO Industries, Inc, n.d. Web. 28 Jan. 2017.

The Native Americans treated her unfairly for her journey, but allowed her some special privileges since she could provide special skills in knitting and sewing. Because of these skills she was allowed other privileges in comparison to the other people being mistreated by the Native Americans. The Natives constantly  threatened to knock Mary Rowlandson’s child on the head because of its cries. This was only initially however, because Rowlandson later is treated more fairly and even allowed to see her children. It was then that she begins to acknowledge the differences between her treatment and the other people being held captive.

This may reinforce gender roles indirectly because sewing and cloth work is largely considered as feminine work especially during these times of living.
Rowlandson, Mary White. Mary Rowlandson: An Illustrated Narrative of the Captivity and Restoration of Mrs. Mary Rolandson. South Lancaster, MA: W. Hazen, 2009. Print.

Mary Rowlandson was forcefully separated from her children after the Indians ransacked her village. She was only allowed to keep her youngest babe whom was wounded and crying. She walked with her child in her arms even after total exhaustion set in. She conitinued onwards walking with the Native Americans. Eventually her child succumbed to its wounds and died in Mary’s arm. Mary didn’t want to let the child go as she grieved for her loss. Again Mary showed that she takes solace in the scriptures of the Bible and saying her children have moved onto the next world. She was later allowed to see her son whom inquired about his already dead sibling. The Native Americans took him away and she found out that he had been traded like property amongst the natives for a mere gun. She wanted to flee as much as the other captives but could not because there were no nearby settlements. Some natives found out that another woman and her hold wished to leave. They decided to kill them and burn them to set an example to the others who would also inquire about leaving. So Mary stayed against her strongest of wishes.
Rowlandson, M. W., & Salisbury, N. (1997). The sovereignty and goodness of God: Together with the faithfulness of his promises displayed : being a narrative of the captivity and restoration of Mrs. Mary Rowlandson and related documents. Boston: Bedford Books.

Mary Rowlandson experienced many hardships after her home was attacked by native Americans thus introducing her to captivity by what she refers to consistently as “barbarous creatures”. She is a woman whom faced many hardships, and yet she still keeps a completely trusting sound relationship with God. She attributes all of her good luck to God, though they be mere silver linings. She often quotes verses from the Bible to reaffirm her points. And she believes that God had actually punished her for not attending a sabbath. (Rowlandson, 16) The point here is that Mary reaffirms the discussions that we’ve had in class when talking about these colonists in which everything is because of God or for God. These people really did attribute their every misfortune and blessing to God without any second thought because this way of life was so strong for them. I personally believe that this society displayed very strong and brutal cult-like behavior in the name of God. To refer back to witches! They believed that witches were around and must be punished because of God’s will regardless of evidence. Or let’s fast forward to the idea of Manifest Destiny in which these same people decided that they must spread their faith from one ocean to the other in the name of God, thus killing and displacing a huge proportion of the Native Americans, whom much more rightly owned the land than the colonists.
Rowlandson, Mary. “The Narrative of the Captivity and Restoration of Mrs. Mary Rowlandson.” EBSCO Publishing Service Selection Page. EBSCO Industries, Inc, n.d. Web. 28 Jan. 2017.

Mary Rowlandson managed to survive the perils she faced from her captors. She had received special treatment from them because of her skills in sewing at knitting. Unfortunately she was separated from her children, one of whom died. She was eventually reunited with her children after she was sold for ransom back to her husband. Her husband later died suddenly. Although she had suffered yet another tragedy her late husband left her a large sum of wealth and real estate. Details are largely unclear but she apparently remarried later to a Captain Talcott. It wasn’t until she had suffered her husbands death that she started writing her captive narrative.

Her book was very popular among people in the northeast areas of the colonies since she attributes most of her silver linings during dark times to God. This was because she was from a very large puritan society on which God was the focal point of most people’s lives. These people were so devoted to God they thought it ok to burn people accused of witchcraft because the Bible said witches were evil.

In many ways Rowlandson was actually treated better by the Native Americans than many people would have initially though as she actually was allowed to ride a horse and they even held her wounded baby for her while traveling. Strangely she owes every single bit of her struggles to God and attributes every silver lining to God although her situation does. It massively improve whatsoever. She talks about how none of her “good fortunes” are just because she didn’t go to every sabbath and sermon as a good Christian woman should. She wasn’t treated completely fairly as a captive; however, as the Native Americans would occasionally tell Rowlandson that they would knock her child in the head. The Natives were not completely hospitable to their new prisoners as one can observe through these horrible threats. It just seemed odd that Towlandson had attributed every single session of strength rejuvenation to her God. She must have been incredibly humble to assume that she was not the one powering through her struggles as a captive.
Rowlandson, Mary. “The Narrative of the Captivity” 1682.” Mary Rowlandson, “The Narrative of the Captivity…” (1682). N.p., n.d. Web. 26 Dec. 2016

Mary Rowlandson obeyed the gender roles without question until their settlement came under attack by Native Americans. She didn’t question them to much and honored her ends as a housewife in this culture on the return promise of safety and protection from the males in the settlement. What she observed changed her ideas on gender roles as she saw:

“Father, and the Mother and a suckling Child, [the Indians] knocked on the head… Another there who was running along was shot and wounded, and fell down; he begged of them his life, promising them Money (as they told me) but they would not harken to him but knockt him in the head, and stript him naked, and split open his Bowels. Another seeing many of the Indians about his Barn, ventured and went out, but was quickly shot down. There were three others belonging to the same Garrison who were killed.” (Rowlandson 68) 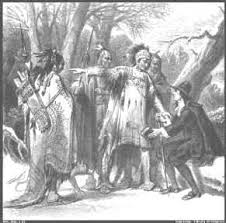 She discusses the events in horrific detail and tells of how the “protectors” of the village really displayed cowardice and incompetence during times of struggle and conflict. After observing this she reconsiders the ideas of gender roles in colonial America and justly so. Gender roles are harmful enough regardless of whether or not they are honored to each other, but in these cases of cowardice in which men manage to oppress women without reciprocating their promises of protection are utterly disgusting. This shows that these men in this society had no honor and complete incompetence in fending off attacks from “foreign invaders”.

My woman of interest is Mary Rowlandson. She was held captive by Native Americans after a raid on her house. She was stolen away and held captive for three months. The Native Americans treated her a bit better than most other people although this was because she showed promising skill as a sewer and held her role as a housewife with much seriousness earlier on. She eventually changes this narrative later on after observing the Native Americans attack the village and observed how these “savages” quickly killed the men of the village who did little to defend the women and children.